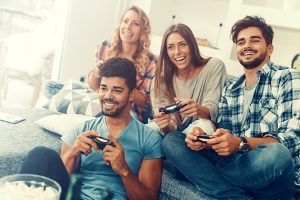 When you’re shopping around for different broadband internet deals you might have noticed that most providers show different speeds for downloads and uploads, and sometimes that difference is huge. But what’s the difference, and why does it matter?

For most people going about their usual online business, their biggest concern is going to be download speeds. How fast do pictures on Instagram take to load, how quickly do Reels load, do streaming movies keep needing to buffer (especially during the best bits!), spoiling your viewing experience?

Those concerns are all due to download speeds. If you’ve got fast downloads then you’ve got that covered. So why are upload speeds of any importance?

We’ve all become a lot more digital since 2020. We’ve come to rely much more on the internet for videoconferencing and sharing documents we create at home if we’re hybrid or exclusively home-working. After more than a year in various lockdowns we’ve become used to actively living our social lives in front of a computer. A fast upload speed means that we’re able to use Zoom or VoIP to talk to friends and family, no matter whether they’re in the next street or the other side of the world.

If you’re working from home in an industry which relies on sending large amounts of data, or collaborating with numerous people who need to be able to see, share, and edit documents in real time then fast uploads are vital, as they are if you work editing video which you need to publish or share with colleagues and clients. They might be able to download it quickly and easily, but if you can’t put it up quickly then that edge is lost.

When you’re in meetings or attending a conference, or taking part in an interview, whether for the media or a potential employer, whether in real life or via the internet you’re always going to want to make a good impression on those who you’re speaking to. So a jittery connection which is constantly interrupted with spinning wheels and ‘buffering’ messages is something you definitely don’t want.

If you’re connected by Wi-Fi and you’ve got family at home it may be necessary to find somewhere quiet where you won’t be interrupted. Unfortunately being quiet and having great signal don’t go hand-in-hand. If you have a long enough ethernet cable you can connect your computer direct to the router, guaranteeing an excellent connection and speeds. If not you may want to use an extender or mesh network pods instead. If your house has a few spots where reception is poor and you’d like to improve it, or you’d like to be able to use the internet in the garden, either for entertainment or reaching a shed or outhouse you’ve converted into a home office there are a range of extenders, mesh and fibre network solutions available.

And then there are the hours when you’re not working. If you’re a fan of gaming online you can’t be making do with low upload speeds, since slow connections mean lag or ‘ping’ between pushing a button and your character reacting. No matter what you’re playing, keeping the time between your reaction and the action appearing on screen to an absolute minimum is vital. So, you need to be able to download a game quickly to begin with, to have it render effectively as you move around the environment, but once that’s taken care of it’s the upload speeds that make all the difference.

Getting The Edge Over Your Competitors

Depending on what kind of game you’re playing, whether you’re just playing with friends or competing in an online championship the barest minimum uploads speed should be 15 Mbps. That might not sound like much, but if other people in the house are also playing, chatting via Zoom, or uploading files of their own you’ll soon find that the minimum you need personally is many times that.

There are several ways to squeeze a few more Mbps out of your upload speeds. Using wired instead of wireless controllers and consoles improves speeds, offers a better connection, and avoids the problem of batteries dying in the middle of gameplay.

A new router will help too. The router your broadband ISP gave you free when you started your contract was fine at the time, but if that was a few years ago and you haven’t bought a new one, it might be time to think about it. Newer routers have a range of features which improve your enjoyment because they intelligently divide data between users. If you’re playing a game or streaming a movie your router can dedicate more bandwidth to you than someone else in the network who’s browsing Facebook or Instagram. Effectively your router will slow down their speed, but they won’t notice as the platform they’re using simply doesn’t have the download and upload requirements of other activities.

When you sign up with Briant Broadband you’ll get a new router right off the bat as your old one which works by connecting with the phone line won’t work with Full Fibre technology. Our routers come with Quality of Service (QoS) which prioritises users who need most bandwidth, a VoIP socket so you can plug in a standard phone if you decide to use it, and dual network capability, meaning you can create a guest network for visitors and Smart devices, keeping them on a separate network from that upon which you keep personal and financial information.

Briant Broadband offer symmetrical download and upload speeds on all of our flexible broadband plans. That means that no matter how much you’re trying to upload and share, how quickly you need your character to react, or how quickly you need to get that video you just edited to the client, you’ll never be disappointed or left with egg on your face.