What On Earth Is OLED TV? 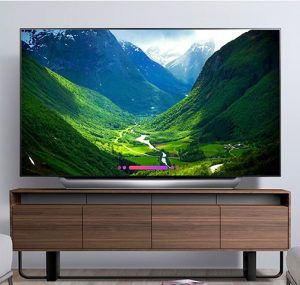 OLED TV stands for organic light emitting diode television. They contain organic materials in the composition which makes it possible to produce a flatscren TV which has many advantages over other HD TV screens.

The technology involved in OLED makes it possible to create a TV screen which is flatter, lighter and able to produce deeper black and higher contrast than backlit HD TVs. Instead of being backlit, each pixel produces its own light, and when it’s off it remains completely black. Total black has long been one of the holy grails in TV technology as a black which is in fact grey adversely effects the overall picture. And because there is no need for backlight, a pixel next to a black on can be completely white (or any other colour) with no bleed, making contrast and colour noticeably better than other flat TV screens.

When the technology was first invented, as with any other new technology, it was prohibitively expensive, and the manufacturing process was less than reliable, meaning that a high proportion of TVs were scrapped before they ever even made it to the end of the production line. This difficulty still manifests itself in the fact that few OLED TVs are less than 55” in diameter as smaller screens are intrinsically harder to make. Because the process was wasteful and too expensive to realistically launch on the domestic user market, brands such as Samsung and Sony left the field. They concentrated on 4k HDR (4,000 pixel high dynamic range) while LG stuck with OLED, only to return when all the teething troubles had been resolved.

Among the settings, all the normal colour, contrast, hue and stereo options exist, you also have a range of modes to choose. Because the TV needs to process so much detail and colour data you need to choose between viewing modes to get the best out of the TV. Action movies with fast movement and lots of noise require a different mode to wildlife documentaries or romances.
While OLEG technology is more expensive to make, the picture quality is outstanding. The screens are thinner and therefore lighter, and are more energy efficient than backlit flatscreen TVs. Also, because the screen is thinner, it is actually flexible so some manufacturers are making screens which can be bent to a parabellum, making a more immersive viewing experience. However, thanks to the thinness of the screen, the image is produced on the surface, making it viewable from a greater angle without the colours doing weird things.

Voice Or Hand Control So You Never Interrupt The Action

The current ads for OLED include LG’s ThinQ AI with the tag line “Listen, Think, Answer” as the Smart flat TV screen has smart voice activated technology built in. After reading their website, it doesn’t appear that the term ‘ThinQ’ is a play on thin and think, but simply a brand decision to mis-spell ‘think’. LGs ThinQ goods are those which are smart enabled and work in conjunction with your smart home devices, home hub, Google Assistant et cetera on a single open platform, meaning that they all talk to one another seamlessly as soon as they are in range of one another.

In the advert the hero of the story asks for the locations the movie he’s watching was filmed, the Smart TV tells him, and also brings up cast details on the bottom of the screen without interrupting the action. He asks it to dim the lights for better atmosphere, and once his daughter mentions it’s time to eat, he is able to call up the details for local restaurants, all without moving from his spot on the sofa.

The Sony Bravia is an alternative to the LG, they also are promoting the blacks and the incredibly high contrast that their product creates. Unfortunately, because of the very nature of their unique selling point, it’s hard to convey how much better their product is on the product you’re watch the advertising on. However, it’s clear that the that the richness of colour, the contrast, and the deeper than average black is something they too have nailed wonderfully. The difference being that the LG OLED TV can be spoken to directly, while the Sony requires you to speak to it via your smart speaker or home hub.

Direct voice Smart TV control, search, and control of other devices through the TV
Brilliant contrast and picture quality
Lightweight, low power and visible from wider angles than other flatscreen TVs
Controllable via voice or remote handset