Turning Your Family Room Into A Home Cinema 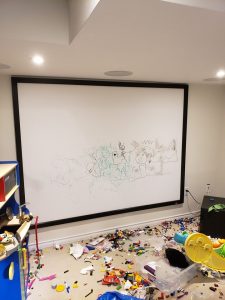 When people think of a home cinema they probably think of a small bank of recliners, low light, big screen and an audio system most of us would have to take out a second mortgage to be able to afford. And yes, such home cinema exist and we’d all love to be able to have one in our home if only we could, but what about we mere mortals who don’t have the kind of wallet that allows for a wing of the family pile to be given over to home entertainment?

What if we’ve got kids, a regular size house, bills and car payments to make? How do we get into Home Cinema?

First of all, think about which space you’re going to use and how you already use it. People don’t tend to keep the Front Room for best any more, nor do they have dining rooms which are only used to entertain guests. Often these spaces have been knocked through to provide a larger living space or made into family rooms where the kids can shout and scream until they wear themselves out in time for bed.

Aha! There’s the trick! If you’re going to use it for watching serious movies or playing until it’s your bedtime there is no overlap. Once the kids have vacated it it’s yours for the use of.

But how do you go about creating a space that’s good for the kids to play in but will afford you entertaining downtime when they’ve gone to bed?

If you have younger kids it may not be such a good idea to get a large flat screen TV, sofa or recliners. Instead a retractable screen, a projector and beanbags might be more the answer you’re looking for. A retractable screen makes sense as it won’t be in the way when the little ones are running around, the fact it’s stored at ceiling height means they won’t be getting crayon on it and, unlike a TV there’s no danger of it getting scratched, cracked or knocked over entirely.

And if you want to watch cartoons with the kids or play a videogame with them there’s nothing stopping you from doing so any time of the day as projectors today can deliver a picture bright enough to be seen in all kinds of lighting conditions. It’s easy to get incredible sound to go along with your picture from ceiling mounted speakers too. Ceiling mounted so that they are unobtrusive and small fingers can’t punch holes in the membranes of drivers which you spent a lot of time and money finding and placing in the perfect location.

Easy Access Is The Key To Hassle Free Home Cinema

If you have older kids then making players, consoles and control panels accessible to them won’t be such a problem. Letting them choose their own music while doing their homework or letting them decide on which movies they want to watch or games they want to play on a dreary Sunday afternoon will keep them entertained and out from under your feet, and parental controls mean that you don’t have to supervise their choices.

If you decide to use a flat screen TV instead of a projector and screen you’ll find they’re best wall mounted in a room which has to serve more than one function. Wall mounting your TV means there’s more room on the floor, the danger of having it tumble over when things get boisterous is eliminated, and you can still plug things such as games consoles, DV cameras, computers et cetera directly into the back of the set far more easily than you can with a projector. (Alternatively use Chromecast or similar casting devices whenever possible.)
Another great addition to a family room cum home cinema is a home hub such as Alexa of Google Assistant. Smart Home Devices make relaxing in front of the TV so much easier as they save so much getting up and sitting down again. Adjust the lights, curtains, change the temperature, and choose what to watch all from the comfort of your favourite chair.

Setting The Mood With Environmental Controls

Because the light and heat are incredibly important when you want to watch a movie after all. Using Smart coloured lights it’s possible not only to dim them to a level that makes watching TV more comfortable, it’s also possible to set the background colour too, making your experience far more immersive. If you’re really into the complete experience, why not turn the heat down a few degrees when watching The Thing or Frozen Planet or up a few when watching Lawrence of Arabia or Sunshine?

Going back to Chromecast to synch games and computers to your large format TV set, streaming devices are something of a necessity for a fully rounded home cinema. Amazon Fire Sticks, Fire Cubes, and various other devices allow you to simply plug a dongle into the back of your TV (or projector) and transmit what you’re watching on your phone, tablet or desktop computer onto your TV. This means that you can watch subscription packages, movies, YouTube, MP4s and any other kind of media you like without the hassle of messing about with plugs, cables, adapters and finding spare ports in the back of the TV every time you want to switch from one device to another.

Come In, Sit Down, Relax

For a family/home entertainment room for families with smaller children, why not go with oversized beanbags instead of regular furniture? Easy to put anywhere or pile up out of the way glossy or leather effect finishes are easy to clean. You can jump on them or throw them around without causing any damage. Families with bigger kids might want sofas and recliners so you can cuddle up to watch something soppy or stretch out comfortably to watch something more absorbing.