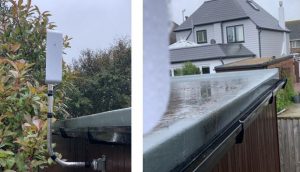 I recently discovered that there is a maximum time one can be on hold with my Wi-Fi broadband provider. You’ll be surprised to learn that it was five hours. Five hours of listening to the same three records over and again while being reminded that my call was important and that someone would be with me soon.

(Sony Experia if you’re impressed that the battery could hold up that long on loudspeaker and are wondering what phone I was using.)

The problem I needed to talk to them about was a faulty router. After about six months of relatively stable, but not perfect signal the router kept dropping out and needed to be turned off and on again every few hours to get back onto the internet. This was a known fault and a call to the help line was supposed to get me back online with a software patch or to arrange for a newer, better Wi-Fi router.

To save yourself from that particular circle of Hell known as Hold there are a number of tricks you can try before submitting defeat and picking up the phone. (Ironic, isn’t it, that my broadband provider also provides telephone service, and yet it seems the last thing they want to actually do is talk to you?)

First of all, find the problem.

There are many different ways your Wi-Fi can be ‘bad’ but knowing precisely what is wrong helps to find the solution. If pages are mind-bendingly slow to load when you’re in the same room with your router, or you even plug your computer in via an ethernet connection you have a different problem from to people who need to restart their router every few hours, or if your download speeds are fine in one room but not in another.

With your computer plugged in run a speed test. If it’s slow even when directly connected you have no choice but to make that call as this is indicative of a problem with your router. Your contract should stipulate a minimum data speed which you are paying for and once you’re talking to someone they should be able to confirm what your download speeds are from their end. The solution could be a new router or following a few simple instructions to install a software update. If you’ve been suffering for some time then ask for a refund, especially if it was a fault they were aware of but waited for you to get in touch with them instead of making you aware of it themselves.

If the speed seems fine when the computer is plugged in then there are several other options you have to fix the problem.

My laptop sits on my desk next to the router, so I plug it in via an ethernet cable as a matter of course. I probably don’t need to, but since they’re so close to one another, why not? When my router wasn’t working properly one of the faults was that I had to keep reconnecting to the Wi-Fi, so plugging it in while also having Wi-Fi connection gives me double the assurance.

If your problem is getting decent broadband speeds throughout the rest of the house, try moving the router to a more central location. If your device is by the front door and you have terrible trouble connecting in the back bedroom then the problem could simply be a question of proximity.

It may not be possible or practical to move the router from its current location, in which case Wi-Fi booster disks are an option. You can buy these, but if you can stand it, talk to the sales people at your broadband provider. Several companies offer free repeater disks to ensure that you get fast Wi-Fi broadband throughout the house. Wi-Fi extenders are also an option to consider. These are designed to provide Wi-Fi over a longer range, so for example if you have an office in an outbuilding or your smart security system covering your property depends on wireless signal instead of a cable connection you can install a point to point extender which sends a beam to a receiver, meaning Wi-Fi access is possible several hundred yards from the main router.

If putting the Wi-Fi router at the centre of the home doesn’t help.

Once you’ve tried moving the router into a more central location and you’re still getting blind spots repeaters can still be the solution. Large solid objects, particularly metal objects such as fridges, filing cabinets or iron baths can cause signal shadows where the Wi-Fi is blocked out. A repeater can help fill in those gaps and ensure that a ‘shaded’ area is able to get better speeds in future.

As I mentioned above, my problem was due to a known fault with the software which my router had shipped with. Look out for conversations about your devices on discussion boards, and keep your software updated. Pressing ‘reset’ and once it’s reset turning it off and on again after twenty seconds can actually cure many ills as once it reboots it should have updated any outstanding software issues and kill any bugs, failed, or running scripts which could be slowing things down. Depending on how much software your router needs to update this process could take a minute or two, but not much longer. If the router is old and has never had a reset in the past you’ll either be surprised at its performance after this little spruce up. If not you may decide that it’s going to be a better idea to simply put it in for recycling and get a new one.

Back on the phone to your broadband ISP

Again, talk to your ISP to see if they will send you a replacement for old or faulty equipment and complain about the price you’re paying. This trick should get you bumped over to someone in the Retentions department, a bureau which exists to stop customers migrating to your ISP’s competitors. For the long term customer they should be able to offer you incentives to stay, especially considering all the inducements they offer to new customers. Why shouldn’t you, a loyal customer, get some of that good stuff too?

Then there are third party routers. The one which was sent to you when you initially signed your contract was probably designed and manufactured a year or two before hand and it was the cheapest option for your ISP to send you even then. The demands that we put on our routers today far outstrips the capacity it was originally designed for, what with IOT and Smart technology all needing bandwidth to work effectively. A top of the range Wi-Fi router is better built, designed for capacity and futureproofed against many possible contingencies.

Because they offer such good performance, designed as they are for people who need a lot of data very quickly and without the slightest risk of interruption they come at a premium, especially if you compare the price against the free unit you’ve been complaining about for months. However, there are always bargains to be found, so shop around and see if you can’t pick up a bargain.

Briant Communications supply and install a full range of cabling, fibre optic and wireless devices, and Wi-Fi extenders for both domestic and commercial premises. If you’re at your wit’s end trying to get rid of blind spots, slow connections and reach remote locations without digging up the garden to lay cables then call us on 01273 465377 or use our Contact Us page to make an appointment for a visit from one of our experienced expert engineers.