Thinking of Boosting Your Home Security With CCTV Cameras? Here’s What You Need To Know 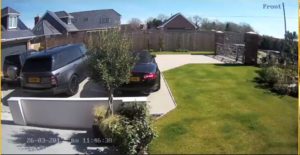 CCTV cameras have been shown to be a fantastic deterrent against opportunist burglars targeting homes in Britain and abroad, making them one of the most popular options for many people boosting their home security.

When burglars plan a break-in it’s not usually well thought out with floor plans and circuit diagrams like the movies would have us believe. In many cases the planning aspect is simply looking a the property and thinking “is it worth me climbing in that window or putting in that door?” and if you own nice things and you don’t have obvious crime prevention devices, the answer is going to be “yes”!

Once inside your property the burglar will generally not spend more than 15 minutes collecting your possessions, putting them all in a sheet, and dragging them away. Opportunistic burglars don’t like to carry any tools or bags with them as they look suspicious, and ‘going equipped’ shows intent and carries a longer sentence in the event of a conviction. Once they have your valuables outside your house they’ll leave them somewhere secluded until they can return to collect them unless they live so nearby that they can get them home safely. If you have a car in the drive and leave your keys where they can be found, then that’s a different story.

So What’s To Be Done To Prevent A Break In?

Smart CCTV cameras are quick to install and sync with your Smart Home apps, they can be linked to security lights, burglar alarms and access control, meaning that as well as deterring intruders you can just as easily welcome guests. The latest cctv cameras will record in HD, even in low light, and many options come with night vision too, making them perfect for crime prevention at any time of the day. You can choose cameras with two-way audio too, so you can talk to whoever’s on screen in real time. Don’t like the look of someone walking up the drive? Tell them you’ll be home in five minutes. If they know that you know they’re there it’s unlikely they’ll stick around.

Installing CCTV cameras does come with some responsibilities for you as a home owner and as a data gatherer though. There are rules about where you can place and aim your cameras which you should be aware of which go beyond simple politeness and respecting your neighbours’ privacy.

Where Can And Can’t You Point Your Smart CCTV Camera?

The first and main reason most people have for installing CCTV cameras is to watch over their doors and windows. If that’s where your cameras are pointed, no problem whatsoever. If someone is on your property and you have CCTV which only records activity on your property then you haven’t invaded anyone else’s privacy.

The issues arise when you place a camera in a position where it records more than just your doors, windows, outbuildings, sheds, barns or stables. Often it’s impossible to cover an entrance or gate without getting a little bit of public highway in the frame. That’s perfectly reasonable and nobody going about their everyday activities is going to have a problem with that. In fact many police forces welcome it as it’s often footage captured by private CCTV cameras, as well as those operated by councils and police which allows them to identify and provide evidence of crime.

Problems for CCTV owners do arise when a camera is located where it points toward a public space or at a neighbour’s property. It’s not illegal, nor even unlawful to do so, however, anybody who is captured on such a camera has the right to demand why, when and how the footage was or will be used under the Data Protection Act. To comply with the act, you will need to have clear and justifiable reasons why you are recording in a public space, and a reason why your need to collect the data overrides the expectation of privacy enjoyed by passers-by.

Placing a CCTV camera where it records your neighbours can be problematic too. In most cases they shouldn’t be too bothered as a camera which protect you equally protects them if you’re able to capture footage of intruders, vandals or burglars. However, while aiming your CCTV cameras at their bedroom windows would be a clear breach of neighbourly goodwill and their expectation of privacy. They might equally take exception to a camera which captures activities in their garden and grounds. If there really is nowhere else to put the camera and it inadvertently covers their property it’s a good idea to discuss it with them before taking any action. Bear in mind that any images which you capture of neighbours or passers-by can be asked for under various Freedom of Information acts,such as the Data Protection Act and GDPR legislation and as a data gatherer you must reply with the images and audio you collected, and, if requested to do so (assuming the footage isn’t to be used in a civil or criminal court case) delete it within one month.

Conveniently, most basic subscriptions for data storage from Smart CCTV cameras only stores the data for one month, the assumption being that if you needed it you would back it up within 30 days, and storing more data than that simply takes up too much space and would be unwanted anyway.

If you intend to comply with the data protection act, and you want your CCTV to have the desired deterrent effect then signage is important. It allows you to inform people that they will be filmed, and alerts burglars and vandals that their activities will be recorded and used in evidence should a case have to be brought. So even if your cameras don’t capture any activity outside of your property it’s still a good idea to confirm, through the use of window stickers and signs, that CCTV is in operation.