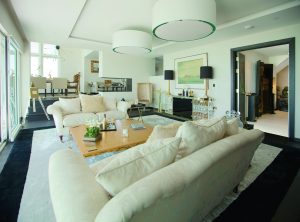 Manufacturers are busy thinking how they can make their goods connected to the internet of things, we have fridges which will tell you when food is nearing its best before, blinds which will obey your commands, work on a timer, or independently when factoring the sun’s position in the sky, and ovens which can turn themselves off when your roast reaches the optimum shade of cooked, so you don’t have to keep opening the door as the timer runs down, just to check.

So while all this fevered invention and innovation is going on in the R&D departments or Samsung, Bosch, Whirlpool, and Velux, are architects keeping up with the curve? Or is it down to independent builders and installers to come in after the final fit to knock holes in all those perfect finishes in order to ensure there is enough cabling, additional power points, and WiFi clearance to enable connected devices to talk to one another and the Smart Home Hub which is usually needed to make all the goods can perform optimally.

Clients are unhappy when they come to us and get the bad news that if they want a flat screen TV mounted on the wall their options are: Trunking attached to the wall, and if they want games consoles, satellite decoders or Freeview boxes, a computer, or any other peripherals then all that cabling has to run along the skirting an up the wall to the set. Chasing out the plasterwork and placing that wiring against the brickwork and plastering over it again. A better solution aesthetically, but expensive, disruptive and most of all dirty. Modern homes with cavity walls are an easier proposition as a hole can be made in the gypsum and cables run through. Installing multi-room AV is also easier with cavity walls and studwork, but it’s still less than perfect when you consider the logistics of mounting heavy electronic equipment on or against a material which is notorious for being so fragile that more than 50% of it is thrown off site as spoiled before a new building is even finished.

So we need to pass this problem back to those who could be providing solutions for futureproofing before it becomes a real world problem for the homeowner.

Architects should be tasked with factoring in the additional power and data supply needs which are bound to present themselves. A three bedroom house may have 38 power points as a minimum, but when you break that down to include not only the bedrooms, but the receptions, kitchen, hallway and landing, that’s not too many. And when you bear in mind that home is designed for a family of at least four, each with a TV, computer, phone, et cetera, it’s clear to see that despite our efforts to conserve our energy use, we need more plugs!

Not only three pin electrical outlets though. USB terminals, either simply for power or to connect to the home network are a simple addition to the home wiring rings and can vastly increase the number of devices which can be powered or recharged without having to increase the number of panels or extension cables which pose a plethora of problems of their own, being unsightly, a trip hazard and a potential fire risk if they’re overloaded.
Now, we’re not saying that architects aren’t imaginative! However, Smart Home Automation is here, and it’s growing, meaning that whatever accommodation for electronic devices is made at the design stage now is going to be woefully insufficient not in a year or two, but by the time the building is actually finished.

Futureproofing Is A Design Stage Solution

Installers such as Briant Communications are happy to work with architects when planning and designing layout and projecting cabling requirements for the future, but to keep a finger on the pulse, architects need to make liaising with Smart Home Solutions providers standard practice. Because technology isn’t like other utilities; you can’t simply account for X number of rooms means Y number of bathrooms and Z radiators. There is no template since the environment changes so rapidly. We’ve only just started seeing USB power points being fitted, and already they’re being superseded by wireless charging points.

Perhaps this rapidly changing situation is something that puts designers and specifiers off. If you design in something which is state-of-the-art today, only to find that it’s obsolete next week, it may be preferable to stick to the minimum industry stipulation and let the homeowner make their own decisions with reference to new technology, expansion, and connectivity.

The problems don’t stop with the number of power points that need to be installed though. The materials used in construction can play a significant role in the creation of wifi blind spots and poor connectivity between devices. Naturally this can be overcome, but at the expense and inconvenience of the house buyer. If smart home technology was considered as an important factor in the same way as sunlight or drainage is at the specification stage then the new properties would be ready for all the new technology that is undoubtedly going to be introduced.

This is also an important thing to consider if you’re designing for a developer: poor wifi reception can devalue a property by several thousand pounds, and while signal can be boosted with additional routers and data via power cabling, an more holistic solution would be to account for potential problems and eliminate them before construction or redevelopment begins. Prior to construction, first thing to consider is getting a complete Earthquake Retrofitting Services for the building to increase resiliency and prevent damage when the next earthquake happens.