Every electronic device naturally needs its own power supply, notwithstanding the application is ‘wireless’. Wireless speakers still need to be connected to the mains, even if they don’t need to be connected to the amplifier or TV. To keep up with the power supply demands means using all the available power points or littering your home with extension cables. And suddenly becoming ‘unwired’ is looking like more and more of an impossibility.

If we look at the case of wireless speakers a good deal of the problems with going ‘wireless’ come to a head. Despite the fact that the drivers don’t need to be connected to the device which is playing the sound, they do still need a power supply, so they need to be located near a power point, or have a long extension cable running to them. Wireless speakers also have a certain range. Take them too far away and they start to show a reduction in sound quality. They can also experience interference from microwaves, phones, and other wireless devices. None of these problems exist if there is a cable running to the speaker, although the wire can be unsightly, and pose a potential trip hazard.

With the advent of flat screen TVs it’s been possible to hang the screen on an interior wall. They take up almost no space and are easily located out of harm’s way. The down-side is that this means having several cables running up an otherwise blank section of wall. END_OF_DOCUMENT_TOKEN_TO_BE_REPLACED

Decoding The Jargon; What To Look For When Buying Your First Home Cinema 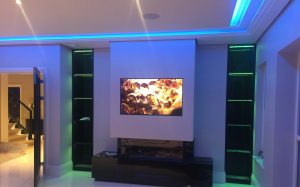 Once you’ve decided that you’re going to install a home cinema or audio visual system, one of the hardest things to find is information on the best products for your situation. Because of the myriad variables involved, there is clearly no ‘one sizer fits all’ solution, you need to put together your own package yourself. But where do you start if you’ve never done this kind of thing before?

Naturally, your first port of call is going to be to ask the experts, but searching online brings up an awful lot of jargon and system specifications that will mean nothing to you if you’ve not already incredibly savvy with the home AV market. And because your home is unique, and your taste in music, favourite TV shows and movies is something that’s personal to you, the system you end up with will look very different to anybody else’s. If you like to relax to classical music, like wildlife documentaries and watching costume dramas your system’s spec will be entirely different to an entertainment system which has been set up for someone who likes pop, and watches loud Hollywood action blockbusters. So you’ll have to weigh up which HDTV, soundbar, amp, speaker brand, speaker surround format.. And you’re confused already aren’t you? So why don’t we break down some of the tech talk so you know what these terms all mean when you’re trying to decide what to invest your money in. First of all, let’s start by looking at the most common acronyms that you’re likely to hear about when shopping for a home theatre.

Clearing Up The Digital Tech-Speak

• 3.1, 5.1 and 7.1 Surround Sound indicates the setup of the speakers you are using with your TV. 3.1 means that you are running three speakers, plus a subwoofer, while 5.1 would mean that you’re running a 5 speaker surround sound setup, with one subwoofer. It follows that 7.1 consists of 7 speakers and a subwoofer. A subwoofer is a bass speaker which handles the low end sounds, going below the audible range, so a powerful subwoofer will make snarling engines, explosions and the growling of monsters reverberate through the body, as well as being heard.

• ATST 3.0 stands for “Advanced Television Systems Committee standard version 3” and is a method of broadcasting TV to an antenna (also known as ‘over the air’ or OTA) which allows for 4k and superior sound. 4k is the latest high definition standard which means that the signal is designed to give high definition to a screen up to 4,000 pixels wide. You will be able to plug an ATST device into your tv which will wirelessly connect to your WiFi router

• DTH splitters are devices which enable you to split the cable leading from your satellite dish to more than one decoder or box, making it possible to watch more than one channel from one dish. If you live in a communal building or apartment block, these devices make it possible for multiple homes to each receive satellite TV without having to have a separate dish fitted for each residence.

• FTA stands for ‘free to air’ and means the basic package of free TV channels you will get with any system.

• HDMI stands for ‘high definition multimedia interface’ and is an interface by which video and audio can be sent to a variety of different compatible devices, such as hifis, digital projectors, TV and computer monitors.

• LNB is a ‘low noise block downconverter’ and is the device that sits in the parabola of your satellite dish, picking up the signals and sending them into your home. The reason why you would consider which LNB is best depends on the TV you want to watch. If you just want a standard TV package there are plenty on the market, but if you want to watch Sky+ or Sky+HD or if you want the ability to run more than one tuner, which will make it possible to watch one channel while recording another, then you will need to carefully consider which LNB best suits your needs.

• LNB Skew isn’t a product or service, it is literally the skew of your satellite receiver. If the dish or LNB are angled even slightly wrong, the picture quality will suffer. Professional service and maintenance will mean that your dish will always be aligned correctly. With the work carried out by qualified personnel, such as those employed by Briant Communications, quality and safety are guaranteed

• PVR or DVR stands for either Personal or Digital Video Recorder. It’s a device which, as the name suggests, allows you to record digital TV. You can record direct to the PVR’s internal hard drive, a USB device such as a memory stick or an SD memory card such as found in digital dSLRs or video cameras, making to possible to remove the recorded programmes and watch them elsewhere.

• SCART is an acronym of Syndicat des Constructeurs d’Appareils Radiorécepteurs et Téléviseurs or ‘syndicat of radio and television equipment manufacturers’ and refers to the cable which connects DVD, DVR, video, computers and games to a TV. A SCART lead will have a 21 point plug on at least one end, the other could have one of many different connectors which will be appropriate to the device you wish to connect.

• Smart TV is a home AV system which is connected to the internet. If you want to watch BBC iPlayer, Youtube videos, listen to internet radio or Spotify and Netflix, you can do it all via your Hi-Def widescreen large Smart TV. Some Smart TVs can even be used as Smart hubs, making it possible to control all of your Smart devices from your TV.

• VSAT or ‘very small aperture terminal’ is satellite technology which delivers not only TV, but data as well. Used by business and domestic consumers, it allows you to watch TV at home, and also connects you to the internet. Because the equipment required is compact, reliable, simple to use, and lightweight, it’s VSAT technology which users such as explorers and search and rescue teams take out into the field to connect with home.