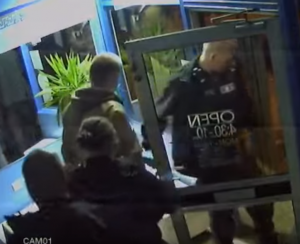 Shopkeepers have always had to have an eye to their own security. While any homeowner can simply shut their doors to strangers, it’s retailers and service providers who have to keep their doors open to all comers in order to make their living. We’ve all seen the hand-written crime prevention signs saying “no more than 2 schoolchildren in the shop at one time” and felt the indignation of the young. But the store holder clearly felt that insulting and alienating what is probably a large part of their passing trade, by implying that they couldn’t be trusted if not closely observed, was worth it.

Today we’re much more familiar and comfortable with CCTV cameras than we were in the past. We understand that observation protects us, notwithstanding some people’s paranoia about mass surveillance and government intrusion. With police cuts there are fewer police on the beat, and city centres are overstretched at night over the weekend, so CCTV monitoring is in place to deploy police where they are needed the most, breaking up disturbances and preventing assaults more efficiently than patrolling the streets, despite this having the notional effect that the police are now paramilitary, while ‘community policing’ has gone by the wayside. END_OF_DOCUMENT_TOKEN_TO_BE_REPLACED