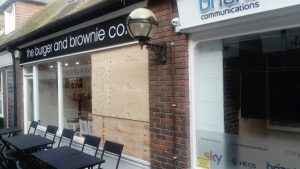 Not only does a large piece of glass, a computer and stock need to be replaced, the café couldn’t open while the broken glass was removed, the wooden frame repaired and made safe, and once opened again, business is affected as the temporary board over the window looks unattractive. Unfortunately our security CCTV cameras were trained on our property, however, the bizarre and suspicious behaviour of a member of public was caught on that night. The individual can be seen walking around and around, shining a torch through the windows of our neighbours’ shops and then apparently concealing something in his clothing as he takes flight.

However, the police didn’t ask us or any of our neighbours if we had CCTV footage of the night, or whether there were any eye witnesses to the break in. As well as having plenty of circumstantial evidence against the suspect the owner of the shop opposite can be seen coming to the door of his premises, speaking to the suspect, and going back inside. Shortly after the man can be seen shining his torch into the windows of the shop again, apparently to see if he was still on site. END_OF_DOCUMENT_TOKEN_TO_BE_REPLACED