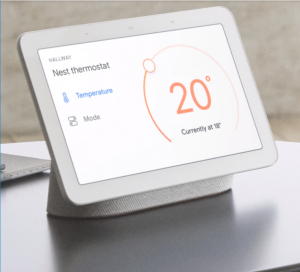 As well as contextual understanding, it also allows you to have an ongoing conversation, so you don’t have to use the ‘Hotword’ (the spoken trigger that starts these devices listening) every time you want to have the assistant do something. It also recognises different voices, which is great for access to shopping, games and parental controls over adult content. END_OF_DOCUMENT_TOKEN_TO_BE_REPLACED

Google’s Home Hub is the video interface which you can use to control your smart home and Google assistant, either by voice or fingertip on the 7 inch touchscreen.

Google’s Home Hub does all the things you’d expect it to, from controlling media throughout the house to the temperature and access, including security cameras, doorbells and intercoms. You can also make broadcasts, announcements, reminders and notes, and search the internet just by talking to Google assistant, which is built in. Just like any other smart home device, you connect all the apps on your phone, tablet and hub and you can control anything from anywhere.

As well as all the other apps and devices, Google have added Nest to their portfolio, and if you don’t know, Nest are market leaders in wireless environmental controls, a broad brief which includes security cameras and motion detectors, intercoms and doorbells, thermostats and alarm systems, such as smoke, fire, CO and intruder alarms.

The Home Hub Nest allows you to monitor security cameras both inside the home and out. With Nest you can not only see when people are coming to your door, but watch the pets or keep an eye on your kids if you think they’re being naughty when you’re running late home from work! Motion detectors activate the cameras, sending you footage when people are moving about, and yes, you can even set it to recognise when it’s a person or a pet.

All the security sensors can alert you through a variety of means, such as an SMS or email, record footage to the cloud, livestream to your tablet and, with a single touch, let you call the emergency services.

Here’s Not Looking At You, Kid

Unlike other devices available on the market, the Google Home Hub doesn’t come fitted with an integral camera. Which seems odd until you consider that without it, nobody can hack the camera to invade your privacy, or record images without your knowledge. And it’s really no inconvenience since so many other devices can be synched which do have cameras. Because it lacks a camera, it is slightly cheaper than competitors which don’t. A double plus if price and privacy are on your mind.

The Google Home Hub comes in a variety of colours, including beige, charcoal, turquoise and off white, and is fitted with a speaker and mic, which you can turn off just by flicking the switch if you want it to stop listening for a while.

Another feature which looks like a disadvantage on the surface is the cable. To operate it needs to be plugged into a power source via the 1.5m long cable. We’re so used to all our device being wireless that we’ve forgotten that it’s actually an advantage to tie some things to the wall. There’s no chance of the hub getting lost down the back of the sofa, someone wandering off to another part of the house and forgetting to put it back, or the batteries running out when you’re in the middle of something important.

When you’re not using it, the Home Hub sleeps in a default screen which either shows the time, or a clock with the current temperature, weather, and a handy item or diary schedule on display. A simple down swipe will load all your rooms, apps and connected devices, sorted by category, waiting for your instructions.

Briant Communications are an official recognised Nest installation partner, and we install and connect a range of the latest environmental and security control systems. If you’d like to know more about any aspect of wireless home security, networking, and audio visual technology, get in touch!