How Does Broadband Internet Get From Your ISP To Your Computer? 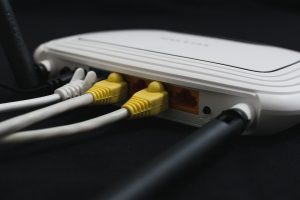 What technology you have connecting your home to the World Wide Web will drastically affect the speed at which you can access broadband internet.

Up until recently almost all internet infrastructure would have been via ADSL, essentially the old phone cable networking which has been with us for generations. While the internet was a luxury that not everybody needed low speeds and a limited network were sufficient, but now that it’s considered a utility, and a part of the basket of goods by which the retail price index is measured.

Today, with the unrelenting demand for faster and faster broadband the old copper cables can’t cope. The technology was originally designed to transmit the human voice to other people (relatively) nearby. The human voice operates at around 50Hz and most phone calls people make were to friends and neighbours who live nearby. However, by introducing the internet to the equation the phone lines now need to deliver data at 2.45GHz all over the world.

To overcome the limitations a number of solutions have been invented. First among these is Fibre To The Cabinet (FTTC). FTTC is based on fibre optic technology, taking advantage of the fact that by using light instead of electrical impulses to transmit data it can deliver speeds many times that which cable alone can provide. FTTC is something of a compromise in  terms of data speeds and convenience of installation. Fibre optic lines are installed as far as the kerbside cabinets you find at the end of most streets. From there they use the existing copper wires to connect your home to the web. That copper leg does slow the data down, however, because the rest of the data’s journey is fibre optic, the overall system is much faster than copper cable alone. FTTC involves using existing connections to the home, so there is no digging up pavements or installing new overhead lines to each property. END_OF_DOCUMENT_TOKEN_TO_BE_REPLACED

Full Fibre, FTTP, FTTH and FTTC. What Is Going On!? 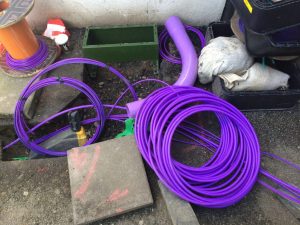 If you’re shopping around for a new broadband internet provider because your old one was too expensive or unreliable you’ve probably been introduced to some new terms which we shall attempt to explain.

You’ll no doubt have heard of FTTC, FTTP and FTTH. The good news is that Full Fibre, FTTP and FTTH are exactly the same thing. They stand for ‘Fibre To The Property’ and ‘Fibre To the Home’ so essentially they both mean that the fibre connection goes all the way from your local exchange down your street, across your garden, through the wall and into your router. Once its there it can deliver up to 900 Mbps which can then be distributed via Wi-Fi or an ethernet cable directly to a laptop or desktop machine, Smart devices and TV.

So what is FTTC?

FTTC is ‘Fibre To The Cabinet’. The cabinet in question is the green phone cabinet you probably have at the end of your street. Sometimes you’ll see a phone engineer sitting in front of one deftly knitting among a bird’s nest of cables and you wonder how they can possibly make any sense of the jumble of wires in front of them. So the fibre goes from the exchange, down your street, but instead of going across your garden and into your wall, it stops at this cabinet and gets connected to your copper phone line instead. Because the copper wire is already installed right up the phone socket in your home it’s much cheaper to install and far less disruptive as there is much less digging of residential streets involved. Dynamic Line Management takes care of ensuring that your connection remains, error free, fast and stable automatically. END_OF_DOCUMENT_TOKEN_TO_BE_REPLACED

Is Your Home Connected To Full Fibre Yet?

Anyone living in Worthing will have noticed the engineers from Cityfibre putting purple wires into the ground, they’re probably on your street right now!

In fact those aren’t ordinary wires, those are fibre optic cables, and your home or business is currently being connected to Full Fibre, a nationwide programme of connecting people to superfast and ultrafast broadband internet, and foregoing old, slow copper phone lines.

Briant Broadband is a business partner of Cityfibre, making us your only genuinely Worthing based local internet service provider.

What does Full Fibre to the Property mean?

Cityfibre and several other infrastructure installers are part of a national programme to get as many people as possible onto superfast and ultrafast Full Fibre broadband by replacing old copper telephone wires with fibre optic cable which is able to deliver vast quantities of data in a flash. Full Fibre to the Property (or FTTP) means that you get fibre fast broadband right into your router direct from the local exchange. Because Full Fibre broadband eliminates old copper telephone wires altogether we’re now able to reliably bring you broadband speeds of 900 Mbps. END_OF_DOCUMENT_TOKEN_TO_BE_REPLACED

While speed doesn’t necessarily equate to bandwidth, the fact that anything you do will be done instantly means that it will be out of the way and immediately, ready for the next task you throw at it. So those speeds will be brilliant for the connected home. As more devices are added to the network currently, if you’re only getting a standard service, things begin to lag. If you’re streaming a movie, the kids are playing an online game, someone is playing music in another room then you’re going to start to notice things take longer to happen, Alexa is slow to respond, movies freeze or start to buffer (and that always ALWAYS happens just when you’re getting to a good bit or pivotal point in the dialogue. I don’t know how it knows, but it definitely does!) END_OF_DOCUMENT_TOKEN_TO_BE_REPLACED