Using Smart Technology To Cut Costs Around The Home

As well as saving you time, smart home devices can cut costs and save you money too, and while the initial outlay is still higher than other household goods which haven’t been smart-enabled, those prices are falling, meaning that barrier to entry is becoming an ever lower bar.

Smart thermostats by Nest and Hive and lighting controls such as Philips Hue can turn the boiler or lights on and off more efficiently than timers or traditional thermostats because of the intelligent software which they contain. Lights which shut themselves off after a brief interval of inactivity are incredibly annoying, leaving you waving your arms about in the dark waiting for the sensor to see you, so why not use highly efficient energy saving LED bulbs which you can either turn on and off from your phone or program to go off when you leave a room, either as part of an IFTTT sequence or using the location of your phone if you’re leaving the house. END_OF_DOCUMENT_TOKEN_TO_BE_REPLACED 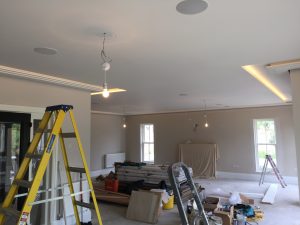 In the same way that it’s now impossible to dream of designing a building which doesn’t have power cables, water and gas pipework, it will also soon be inconceivable that a building can be designed without home automation in mind as well. END_OF_DOCUMENT_TOKEN_TO_BE_REPLACED

There’s A Chill In The Air, And Thoughts Turn To Smart Thermostats

Baby it’s cold outside, and Smart people are using their Smart thermostats and lights to increase the efficiency of their homes.
Now, of course we’ve always had thermostats and timers to control the boiler and central heating so that it comes on and off when we want, but only if the temperature demands it, so what’s the difference that Smart thermostats make?

First of all, it’s important to bear in mind that a Smart Thermostat isn’t for everyone. If you’re habits and want are as predictable as clockwork then the timer and thermostat combination you already have in your home are more than likely to be quite sufficient to your needs. That’s not to say a Smart thermostat wouldn’t be handy in the long run, just don’t expect to see any miraculous plunges in your heating bills if you’re already in complete control of the heating. END_OF_DOCUMENT_TOKEN_TO_BE_REPLACED