Why Buy A Smartwatch? All Your Apps On Your Wrist 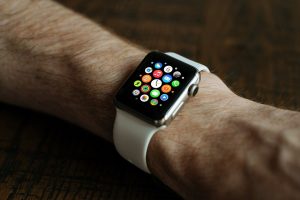 Each watch and phone/computer manufacturer seem to be making their own versions of the Smartwatch. They’re convenient, user friendly, and absolutely packed with functions.

Wristwatches were only invented just over a century ago. Having a watch which you could just glance at to tell the time was critically important to men in the trenches who previously had to dig about in their tunics to find their fob watches to see whether it was time to launch an assault or expect a barrage of artillery fire.

Since then the wristwatch has always been something of a status symbol. Rolex and Cartier made the watch a statement piece, more jewellery than a practical means of keeping track of the time, but with mobile phones the popularity of watches was beginning to wane. There was no point having a watch if you had the time, a calendar and alarm clock all available on your phone. However, the reason why the wristwatch was invented became important again. Digging around in your pockets or trying to find your phone at the bottom of your bag is inconvenient, and having all that functionality on your wrist just makes sense.

Keep All Your Apps Close At Hand

Because we use our mobile phones for so much more than just making calls it makes sense to be able to have an interface somewhere upon us that is easy to get to. So what are the benefits of having a smart watch instead of simply taking your phone out every time it beeps? END_OF_DOCUMENT_TOKEN_TO_BE_REPLACED