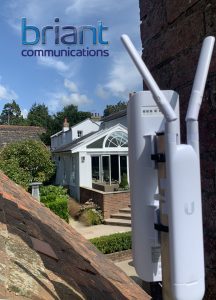 Last week we looked at setting up a temporary home cinema in your garden. But what if you want to extend your Wi-Fi internet into the garden as well. You might want to do this for any number of reasons, and not just so you can work on your tan and stream live feeds from Love Island, the Olympics and the Big Brother house at the same time!

No matter how good your router is, or where you put it, there’s very little chance that you will be able to get good enough reception from it to your phone, tablet or laptop once you go more than a few metres outside. If you’re going to use the internet outdoors you need to think about proper solutions instead of making the best of a technology which wasn’t designed for the purpose to which you’re putting it. However, once you do get Wi-Fi internet in the garden it opens up a great deal of new opportunities which you may not have thought about before.

Taking your Wi-Fi internet outdoors doesn’t only mean that you can watch TV on a mobile device without eating up all of your contract’s data allowance. It means you can convert an outbuilding into a home office or connected workshop, handy if you’re working off plans you need to download or 3D models you need to look at as you’re working. It also means that you’re able to secure these buildings far more easily and effectively than might have been possible before. Security cameras, sensors and alarms which operate wirelessly over Wi-Fi can be located anywhere if you’ve got enough bandwidth in the garden, so you can keep an eye on outbuildings, barns, gates, fences and reverse angles of your home itself instead of being limited to where you can put those devices by the distance you can install a cable.

If you’re interested in taking Wi-Fi outside there are a number of options depending on how you intend to use the internet once it’s out there.

Cable is Still a Contender

If all you want to do is convert a shed or outbuilding into a workspace where you just have a computer away from the other distractions of home which make home working such a drag for those of us who can’t stand it, then simply using a cable could be your best answer. You can achieve this in one of two ways. First by taking a cable from the back of your router out to the building you want to use by suspending it overhead. This is the most obvious and easy way to do it, but it does leave the cable vulnerable to damage from the wind, birds roosting, snagging, and even sunlight.

Secondly you have the option to put the cable under the ground. This is far more protected, but it does involve cutting a channel across the garden under your lawn, flowerbeds and any hard paving you have to get to where it’s needed, and you’ll need to remember exactly where it is any time you decide you need to do any work which involves digging.

If you don’t want to hang a cable from your house to your workshop or office, or dig up the garden because there are already power cables down there then a Powerline setup could be the answer for you. Possibly.

All you need to do to use a Powerline is plug one device into a wall socket indoors and plug your router cable into it. Then, if your outbuilding is on the same power cable ring, you plug in another partner device into the power outlet and plug your computer or another wireless router into it to create a node. It’s a simple solution, but it has its drawbacks. It’s not terribly fast, the cable needs to be on the same ring without a circuit breaker, and the distance over which they work is rather limited. Whatever its limitations, it runs on existing cable infrastructure, you have the option to use wireless or an ethernet cable connection, and it’s very cheap as a pair of basic adapters start at around £25.

Wi-Fi extenders are designed for larger houses, those with thicker walls and to extend the Wi-Fi signal into grounds surrounding the building. You might find that the only reasonable place to position your router is in one corner of the house, meaning that further parts of the house and outdoors won’t get good quality reception without shadowing or blind spots caused by brickwork, wiring, ducting, even large heavy furniture. Simply plug your Wi-Fi extender in and it picks up Wi-Fi signal, amplifies it, and re-transmits the stronger signal.

Wi-Fi extenders of this type are a simple, practical solution, but they do have built-in limits as they can only amplify the signal to a certain extent, and if you create a chain of extenders to reach a distant internet user you lose speed, and see greatly reduced reliability.

Your next option is creating a mesh network which uses several Wi-Fi mesh network devices spread out throughout the home and garden to create a strong, reliable, more effective environment for your wireless devices. A mesh network works differently from extenders as they’re designed to work with one another to create a stronger matrix, rather than just boosting signal. Positioned correctly they can cover the home very effectively, and there are products which are designed specifically to go in the garden meaning that you can enjoy Wi-Fi outdoors.

Several internet service providers offer ‘whole home’ service which comes with at least two additional mesh network boxes or discs which should be enough for a small house to get excellent reception everywhere, but they also offer additional network devices depending on the size of your house and the service package you buy.

As well as getting the network devices which come with your broadband contract, you can buy your own devices which will create a mesh network with whichever broadband data service provider you use, so if you change providers you don’t have to switch out your network boxes or discs.

Point to Point (PtP) or Point to MultiPoint (PtMP) is regarded as the solid business product which will let you securely connect with one point, a receiver which will then attach to a router to create a wireless node a great distance from the source, or multiple points such as receivers and also CCTV cameras, motion sensors, and alarms. They are similar to Wi-Fi extenders, but are far faster, more advanced and much more reliable, especially over distance.

The security advantages are obvious. There is no cable which could be damaged by accident or by design. Intruders would have to get past all the cameras and sensors in order to be able to turn the transmitter off, and the distances that the signal can reliably travel is far greater than any other wireless solution currently available.

Briant Communications are the experts in installing not only digital networking solutions, we also supply and install outdoor security systems, alarms and access control. If you’re interested in installing a safe, secure outdoor Wi-Fi network, get in touch. Call us on 01273 465377 or send an email to enquiries@briantcomms.com