Preparing Your Home For Another Stormy Winter On The South Coast 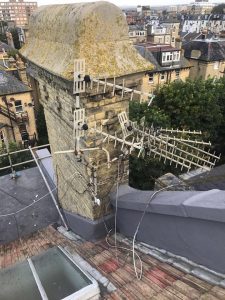 As October draws on it’s a good time to think about preparing your home for the storms and snow that houses in the south east of England face this winter.

People who live on the south coast and along the South Downs will be more than familiar with the gales which can batter the region for days any time between October and April. We’re inured to it and laugh inwardly at those who are new to the area, who think that an umbrella will be of any consequence against weather which is coming in sideways.

But right now is the perfect time to prepare your house for winter, and all that it brings. Summer is a time when we’re all out enjoying the benefits of living in southern England, but now, as the nights draw in and the thermometer falls, it’s time to plan for the worst it has to offer.

Autumn is the perfect time to carry out domestic repairs as the jobs which need doing reveal themselves. You won’t have noticed the rattling draughty windows during summer as they were all flung open to let the fresh air in, but now you’ve closed them you notice how much care they need. The same goes for many maintenance jobs.

Sash windows are prone to rattle and let in drafts. Wedges in the corners will hold them still and reduce a lot of the drafts, however, a draft excluder designed for small gaps inserted where the bottom and upper sash meet fill the equivalent of a two inch square home in every window in the house.

Clear the gutters. It hasn’t rained all that much so far this autumn, but it will, and if your gutters are still full of last year’s leaf mould and detritus then the addition of this years’ will only make things worse. Blocked gutters mean that all the rain from your roof doesn’t go down the storm drains and into the sewers as intended, but ends up flooding your garden or worse, making ingress into your attic. In either of these cases penetrating damp can cause untold damage to wooden joists, plaster, and paper. The mould which accompanies damp problems can also be harmful to heath. Even in winter south facing roofs will still get enough protection from the wind and sunlight for plants to grow in the leaf mould which has built up. Plants growing in the gutters can not only pull them down but the growth will damage walls and roofing, damage which can easily be prevented with a few minutes work.

Check on the sturdiness of your satellite dish and aerial antenna. It’s common to overlook these devices as they are out of the way and once installed easy to forget about until your TV picture starts glitching and the sound falls out of sync or drops out all together. There are several reasons satellite dishes and aerial antenna need maintenance, and a poor picture is among the least dangerous of them! Naturally metal parts which are exposed to the elements corrode over time. Once they’re weakened by rust it’s easy for them to become loose or misaligned. Tree branches which may have posed no problems when the receivers were installed grow and can obscure or knock against the hardware, meaning a loss of reception, damage to, or loosening of fixings and cables.

Check the trees in your garden for damaged branches which might not make it through another winter. It’s most important to check on trees which overhang your car, garage or the roof of your house as any major movement or breakages could cause serious damage or injury. Trees which were damaged badly last year might not show any outward signs of distress from the ground but one sharp gust and they could fall to the ground, damaging anything they meet along the way. The most obvious sign of damage is if a branch failed to leaf last spring when the rest of the tree was fine. But a branch which is hanging on precariously can still get nutrients, so this isn’t your only clue. Branches which move far more freely, or differently from the way they did before should be inspected too. If in any doubt, don’t climb the tree yourself, but call in a tree surgeon who can assess the damage and remove any unhealthy wood without harming the tree itself.

Take care of household security systems. While summer is in reality the time when criminals are most active, taking advantage of long hours of daylight and open windows, there are points in the winter when break-ins spike, so despite summer having a higher crime rate overall, Christmas is in fact the highest burglary rate of the year. The reasons for this are clear; you’ve got all those presents under the tree, the fridge is well stocked, the drinks cabinet is full, and you’re taking the kids away to see relatives, leaving the house empty with all those tempting goodies on display. The best thing you can do is give yourself an early Christmas present and invest in a Smart intruder alarm system. CCTV will let you see who’s coming onto your property, door videos and access controls let you see who’s at the door. You can talk to them, they can sing you carols, and you can let them in or turn them away as you wish.

Paint the house. If painting the entire house is too big a job to do yourself, at least make sure the doors and window frames have been thoroughly tended to. Scrape back any peeling paint, fill in or replace any rotten or damaged woodwork and paint back over it. The wind and rain can drive moisture deep into any chinks in your homes’ armour and when it freezes any damp can cause a great deal of damage to the woodwork. This can lead not only to drafts but panes falling out or even burglaries. It’s true. Many burglars look for poorly maintained door and window frames as they are so much more easily forced and the mouldy wood makes less noise than good quality when it’s being smashed.

Lag the pipes. Burst pipes are a huge problem for households throughout the south of England. Pipes which are old and tired can’t take the weather, and many people who live in the south see it as a point of pride to abstain from turning on the heating for as long as possible. The problem arises when the water inside the pipes freezes and expands. It cracks the metal which was concurrently contracting, and then thaws. Once the water is liquid again it escapes through any cracks which occurred and floods the house. Lagging the pipes will prevent rapid temperature changes which do the most harm and ideally prevent the pipes from splitting at all. Insulating all the windows and exterior doors while leaving the interior doors open is recommended too, as it keeps the heat in, but allows warm air to flow though the house, so no one area drops below freezing while the rest of the house is deceptively warm. You can find contact information of experts to fix damages from minor to major.

These basic household tips should prevent much of the major damage that a winter can do to your home.

Briant Communications provide a TV aerial and satellite dish installation and maintenance service on all along the south coast including Portsmouth, Brighton and Eastbourne. They also supply and fit an outstanding range of smart home security systems including CCTV cameras, burglar alarms and intercoms.