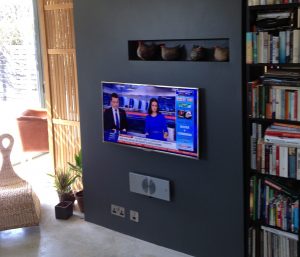 Simple economics would dictate that you get the biggest screen for the lowest price if you want to score yourself a bargain, but in reality that’s far from the case. A large TV in a small room will absolutely overpower the space and you won’t be able to get physically far enough away from the screen in order to be able to enjoy the picture. The rule of thumb is that the screen should be positioned one and a half to three times the screen’s diameter from your head. So if you have a 70cm screen the closest you would want to be from it is just over a metre, and the furthest you would want to sit would be approximately 2 metres. You would most likely want to sit within a 30 degree angle of the screen. Flat screen TVs are made up of laminated layers which perform a different task in the makeup of your picture. Increase the angle you’re watching at too far from 90 degrees and your view of the layers goes out of phase, meaning that colours change or invert entirely.

So you need to find a screen which you can sit directly in front of at a reasonable viewing distance. You also need a TV which will fit in with your home physically. Many people hang their new widescreen flat screen TV over the mantelpiece not realising that this is far from the best place to hand a television you’re intending to look at for 6 or more hours a day.

First of all, it’s too high. The best height for your screen is where the centre of the screen is in line with your eyes when you sit in your preferred viewing position. Putting it too high on the wall means you’re always looking up, which is bad for the neck, that means poor concentration and prevents you from relaxing if you’re enjoying a boxset or movie marathon. Then there’s the heat. Putting your screen above a working fireplace will mean that the set cannot cool down effectively. Eventually this will mean that the tv will start to shut down unexpectedly and ultimately result in damage to the LCD and electronics.

Once you’ve found the right height and distance you need to choose the best source for your broadcasts. If you decide to go internet only, and never watch BBC shows as they are broadcast, or on catch-up then you no longer need to pay the License Fee. But if you get caught watching BBC programming without a license you are liable to a fine or even a prison sentence, so make sure you know exactly which shows are OK to watch and which are not.

Freesat, Freeview, Sky or Internet TV. Which is best for you?

Choosing Sky, SkyQ, Freesat or Freeview will mean that you will have to buy a TV License, even if you never watch BBC output. Even if you delete the channels from your menu, you still have the ability to watch them (should you reset your options) and therefore you pay. And that’s on top of your satellite subscriptions if you choose to pay for sports, drama, children’s or movie channels on top of your basic package.
If you want to watch the internet through your TV there are several ways you can achieve it, for example you can use Google’s Chromecast which lets you watch apps from your phone or computer wirelessly. If you want to effortlessly control your TV with your voice and stream from your favorite devices, browse this site  https://www.vizio.com/en/google and discover it yourself.

Alternatively you can run a cable from your computer to TV and run it as an additional screen. One particular plus with doing this is that you can use your HDTV screen as a computer monitor, so if you write a lot, use Photshop, edit films, or enjoy using social media you can see what you’re doing via your flat screen TV instead of your computer screen.

If your new TV comes with Wi-Fi built in that’s fine, but it’s a good idea to connect it to the internet via an ethernet cable nevertheless as the cable gives you the most reliable, stable signal. While the Wi-Fi is running at full speed you can watch any movies or programming you like without any problems, but if there is an interruption, a lot of other people are doing things wirelessly at the same time, or your router starts misbehaving, the show you’re watching could start buffering, running at a much lower quality, or freeze altogether. Connecting your TV to your router via a cable means you should be able to avoid all these problems unless there is a genuine fault with your electronics somewhere.

Connecting to Freeview, Sky and Freesat is as simple as it’s always been, you simply plug in and start watching. If you don’t already have a satellite dish or aerial installed or properly aligned then companies such as Briant Communications, who work independently of the channel suppliers, can install a range of receivers wherever they’re needed. Many aerial and satellite dish installers are limited as to the work they can carry out by their company’s insurance and health and safety policies, but Briant Communications engineers have the highest possible cover needed to install at height and in difficult to reach locations. They’re experienced in all kinds of access devices including cherry pickers, scaffolding, ladders, even abseiling when necessary.

You should be able to simply pass an HDMI cable, SCART, or aerial lead between the TV and the Sky box or wall terminal, power up and scan for channels if it’s the first time your new TV or Sky box has been plugged in. Once the scan’s complete you can sit back and enjoy.

Picking The Presets For Your Perfect Picture

Colour and contrast are very much a matter of personal taste. A lot depends on the room you’re watching in and the time of day that you’re seeing your shows. Most people don’t have the patience to adjust their TV for each scenario, so just settle for a picture brightness and contrast which is a good all-rounder. You’ll probably want to avoid the pre-set options though. ‘Dynamic’ is the setting which makes it look best in the front of the shop. The colours are far too bright and contrast is too high as the picture has to be visible from across the street to tempt you in. Unless you’re going to watch the TV from the other side of the road, best avoided!

Conversely you may even find an ‘eco’ option. This option may save a little energy, but what you lose in picture quality probably isn’t worth it. Eco works by limiting the back lighting and brightness of the LEDs which make up the picture, but LEDs are such low power devices it makes no significant difference and all you get is an image not worthy of the television set’s capabilities.