Now you’ve switched broadband provider, what about your old router? 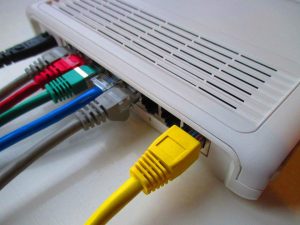 We’re all trying to do our bit for the environment by reducing waste, recycling and reusing where we can, and that notion includes old redundant and retired tech as well, but what’s the use of an old router you don’t need any more? You might be surprised to learn that there is life in your old router yet!

When you sign up with Briant Broadband you’ll not be able to use your old router as ours run on fibre optic data rather than electronic signals down a copper wire. But that doesn’t mean it’s useless, or that you should necessarily throw it away. (Please note, if you do dispose of it, it can’t be thrown in either recycling or non-recyclable landfill and should be taken to your local refuse centre where they can recover the metals and minerals used to build it safely.)

Briant Broadband supply a brand new fibre router with our Full Fibre broadband packages. The products we provide are extremely good, they’re reliable with a signal which is more than sufficient for most homes. However, if you encountered areas in your home where reception wasn’t so good, for example where thick walls, or parts of the house which were simply too far away from the router meant that the signal was weak, then your old device could come to the rescue!

Your old router is your new wireless repeater

You can connect your old router to the new wireless network using the wi-fi signal so it can then share access to the wi-fi network, thereby increasing coverage. If you’re a serious gamer then this might not be the long-term solution for you as there may be some latency issues since you’re now using two routers instead of one, but for most people this is a perfect solution for increasing the range and strength of your Wi-Fi network.

Your old router welcomes your guests

Whenever they come over your friends and family are going to want to connect to your Wi-Fi rather than use up their data allowance on their phone. If they’ve brought their laptops along with them, they’re going to want to use them too. We’ve covered the security issues of letting other people use your home Wi-Fi network before, so why not use your old router to create a network where your guests can use as much data as they need without ever having access to the network YOU use to connect your Smart devices and computers, store data or any other sensitive information?

To do this all you need do is connect your old router to your new password protected network but give password free access. This will use the guest network feature on your old router and automatically prevent people using it from getting access to your own private network.

If your household uses a lot of computers, smart TVs, IoT tech and other devices which rely on data to perform you will find that there are times when the number of ports in the back of your router just isn’t enough.

While many or all of these devices work well wirelessly you’ll find that several of them, such as gaming consoles and smart TVs just work better and more reliably if they’re connected via an ethernet cable to the router. However, once the ports in the back of the router are full, you’ve got to start deciding which are going to be cabled, and which are wireless. But not if you have a network switch! Using your old router gives you between four and half a dozen new ports without having to go out and buy a new switch, and all you need to do is turn wireless networking off on your old router when you plug it in so as to avoid access conflicts.

Or it could be a wireless bridge

If your new router or wireless broadband receiver is Wi-Fi only you’re going to have a hard time connecting any devices which aren’t Wi-Fi enabled. May IoT devices are now, but there’s no reason to suppose that your desktop computer is Wi-Fi, particularly if it’s an older model. Can you imagine the inconvenience of retiring an old computer you still use every day, and have done for years, just because it’s not Wi-Fi enabled? And here’s your old router to the rescue! In the same way that you would use your old router as a wireless repeater, you can simply connect your computer via an ethernet cable to the router and connect the router via Wi-Fi to your new network.

It could even be a IoT and Smart network hub

In the same way that you can use your old router to create a guest network for visitors and keep them off of your private network, you can just as easily create a separate network specifically for your Smart Home devices. The can all talk to one another, work precisely as intended, but never have access to the world wide web. This means they’re very difficult to hack, making your home, data and personal details much more secure.