Not Connected To Full Fibre Yet? Wireless Broadband Could Be For You 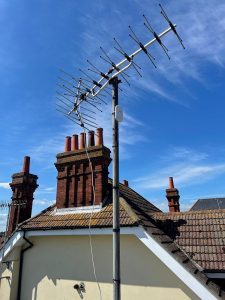 Sure you’ve heard of Wi-Fi, but it’s not the same thing as Wireless broadband. Wi-Fi is the process by which you send and receive internet data between your computer, connected devices, Smart TV and phone when you’re not using your data allowance. Wireless broadband on the other hand is the way your internet service provider gets data to your house if Full Fibre or Fibre to the Cabinet aren’t currently available in your area.

How Does Wireless Internet Work?

Wireless is different from Wi-Fi, 4g or GSM (the mobile phone network) as it does a different job using different technology. Wireless is deployed in areas, such as remote rural areas as it is an cost effective alternative to laying fibre optic cables or installing phone transmitters which might provide coverage which will only reach a few customers. Instead of having phone masts put up, these remote areas have internet ‘beamed’ to them via a mast which the Wireless Internet Service Provider (WISP) installs and trains on the area they wish to cover. So long as you can get ‘line of sight’ between the receiver which the ISP provides and their transmitter, you will be able to get high speed broadband. The speeds you can get may not be as fast as Full Fibre or Fibre to the Cabinet (FTTC), but they will certainly be far better than anything which was previously available using old copper phone infrastructure.

An example which might help you picture how a wireless internet connection works is to think if a time when you used a Smart phone as a mobile hotspot for a computer. The phone connects to the internet, and your computer tethers to the phone. Instead of the phone you have your wireless receiver and instead of only getting signal within a few feet of your phone you get many more metres from your router (your Wi-Fi router can be connected to several more routers via ethernet cables if desired, giving even greater coverage.

Your wireless router will give far better coverage and you’ll also be able to connect many more devices to it before you start to notice any slowing of your broadband service. The speeds you get may not be as fast as Full Fibre, but they’ll be better than any alternative, and you won’t be capped, so no running out of data halfway through the month and having to pay an additional fee to get more like you would if you were relying on a GSM connection.

As mentioned above, you’ll usually find your ISP only provides Wireless broadband where Full Fibre or FTTC isn’t currently available and the phone network is patchy or weak.

When the WISP decides to set up in an area they will install a transmitter or set of transmitters which can beam signal in a particular direction in order to cover a town, village or housing development. If a lot of users were to all use it at the same time then no doubt it would slow down, but if there were a lot of users there in the first place they would have other infrastructure in place, so one or two transmitters to cover a particular area are usually sufficient.

The transmitters are located on high ground, on high buildings or elsewhere where the most receivers can get ‘line of sight’ connection to the transmitter. Naturally the transmitter needs to be connected to the internet itself, so this can be via a single fibre connection (much quicker and easier to install than it would be to connect each property) Alternatively the transmitter can relay the data to another nearby tower and so on until it reaches the WISP’s servers.

Getting Wireless Into Your Home Or Business

At the customer’s end, all that is required is a small receiver attached to a high, prominent point on the property. In most cases this will be an existing aerial mast or chimneystack facing in the direction of the nearest transmitter.

WISPs are generally owned and run by small, independent local companies who have identified a need among their neighbours and community and formed a company to provide it. This means ‘local’ is their unique selling point. They know the area, they know where their customers live, and are able to offer the kind of knowledge and customer service that regional or national companies are unable to provide.

WISPs are an important if under-recognised arrow in the quiver of ISPs. While people are excited about the Full Fibre rollout taking place all over the country at the moment, it’s WISPs who are ensuring that rural areas, remote areas, and people otherwise left waiting for Full Fibre are able to get what is generally regarded as a utility: Superfast broadband which makes it possible to work, play, conduct business and learn no matter how far you are from your nearest ISP.

If you’re interested in broadband internet, but your area isn’t due to get Full Fibre or FTTC soon, talk to Briant Broadband about their Wireless broadband options. Visit the Briant Broadband website, email info@briantbroadband.com or call 01903 221999