Which is Best For Home Cinema, Projector or Flat Screen? 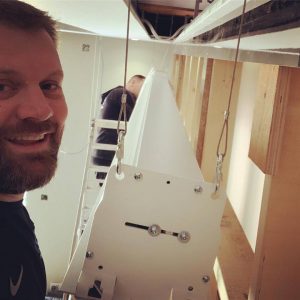 If you’re looking for a large HD picture to watch movies, play games, create a home cinema or just watch regular TV you might think you need to buy a large format TV. However, it may surprise you to know that many projectors are not only HD but 4K compatible, giving a clear, crisp image up to two or three times the size of a comparatively priced HD TV set.

Ideally the room you would set your projector up in to create a home cinema would be dark enough to eliminate ambient and encroaching light. Just like at the cinema, the darker the room the better, but if you want to get a real home theatre experience, that would be equally true for an HD TV too. If you’re converting a basement or loft, rooms which don’t have windows or rooms which can easily be blacked out are the best because the darker the room the better the picture. Consequently a projector with delivers 1,500 lumens would be sufficient for a room which can be completely blacked out, while a room which can’t be blacked out entirely would require a projector of 2,500 lumens and high gain screen to deliver a high contrast, bright image.

The first thing anyone would expect from a projected movie is its size. If you want to go with a projector the only thing holding you back in terms of picture size is the size of the room you’re putting it in.

While projectors create a picture more than twice the size or more or a comparably priced TV the bulb can be expected to blow far sooner than a TV screen will burn out or otherwise break down, however, the bulb is easily replaced in a few minutes at a cost that’s negligible against the price of a new television.

Projectors are far more mobile. Screens can be rolled up and moved around with much less fear of damage, (indeed, you can make do without a screen at all if you have a white or off white wall) while the projector can be taken off the shelf or down from the ceiling and carried in one hand then put up in another room, a friend’s house, the garden…

It’s easy to get the home cinema experience. Paint the wall with specialised projector paint, fit a permanent screen or install a motorised screen so you can pack it all away without any effort when you’re not watching. Not only does rolling up the screen while not in use look tidier, it protects the surface from accidental damage, dust and dirt, any of which would spoil your viewing pleasure.

If you don’t have a room which you can make very dark you lose resolution, meaning that a projector isn’t often suitable for the everyday living room or lounge.

To make them worth while you do need a large space in which to use them. If the space is too small the picture is easily interrupted by shadows cast by people and pets moving about or objects coming in between the projector and the screen.

The sound you get with a projector is less than optimum until you connect it to your surround sound system. If a projector ships with any speakers at all it will be a small built in unit which can’t possibly give you the kind of audio you would want from a high performance home theatre.

The most obvious thing about a flat screen TV is that you can take it out of the box, plug it in and start watching right away. There’s no need to focus it or calibrate the keystone to get a perfectly rectangular picture.

You can watch it perfectly comfortably during the day or with all the lights on. While this isn’t perfect viewing conditions for either TV or projector, the affect on a TV isn’t nearly as impactful as on a projected picture.

You can pick up your TV and watch it in any room without any fuss. So while projectors are indeed mobile you can put a TV on a desk and start watching right away, no matter the size of the room.

TVs are easily cleaned. When your TV gets dusty you can just wipe it down with a soft cloth while your projector is much harder to clean when dust gets onto the lens or into the cooling system.

TVs are simply more convenient. You can simply plug thing in, attach a few cables and everything is ready to go. Games consoles, your computer, Sky Box, Freeview receiver, and surround sound can all simply be plugged straight in at the back of the set.

TVs are fragile. You’ll rarely see a projector which has been cracked, dropped, or smashed but free standing TVs are easily knocked over or struck with objects, especially if you have pets or children.

Flat screens are subject to screen burn as they age. Any LCD or plasma TV can suffer from screen burn, and OLED TVs, while having incredibly good quality picture, contrast and size, are particularly prone to burn out and degradation through prolonged use.

Other Features and Benefits:

There are several other considerations which make projectors superior to TVs, so long as you have the right environment to get the best out of them. 3D for example, given a crisp, well contrasting picture, any 3D movie is going to be more enjoyable watched at a ratio you can measure in metres instead of inches.

4K HD projectors currently have a starting price of around a thousand pounds per unit and can easily create a fine quality image of 100”. 4K TVs which can produce a similar sized picture range from three to four times as much. 4K is particularly suited to larger pictures, so while much smaller TVs are available for a lower price, the benefit of having 4K is much reduced.

What’s The Difference Between Screens?

When it comes to choosing the screen you project your picture on to the room where you’ll be hanging it will have a great influence too. A white wall would do in a pinch, but projecting a movie onto it would show up all the imperfections in finish. You can buy paint which is designed to use on walls to work like a screen, this is white or off-white, and made to create a better picture than normal paint thanks to its translucence and texture.

Permanent screens can be hung on a wall if it simply isn’t suitable to have a picture projected directly onto it. Alternatively you can use a manual or motorised retractable screen. These can be rolled up when not in use, meaning that they won’t attract dust or dirt, and are unlikely to get damaged accidentally.

When choosing the screen, gain and colour are important considerations.

Gain is the amount of reflection which comes straight off the screen and back to the viewer. High gain screens send the picture straight back making the picture brighter, but have a narrow angle of reflection, so if your family is watching on the sofa, the two at the further ends won’t be able to see such a good picture as whoever’s sitting in the central seat.
White is the natural choice for screen colour, but it does have its down-sides: the blacks are not as black as can be and they tend to reflect ambient light, making the picture less sharp. A light grey on the other hand has a marginal effect on the brightness of the picture and what the eye sees as white, however, it allows for a deeper black and doesn’t diffuse or reflect encroaching light as much as pure white does.

Strong, heavy screens won’t move in a draft and help baffle echoes and sound reflection, working to muffle unwanted noise. You’ll often find that they come with perforations made so that speakers can be located behind them. The music and dialogue can get through, but reflected sound is absorbed. Add surround sound and you’ll be able to enjoy the cinema feel in your own home whatever you’re watching.

Briant Communications are CEDIA members and as such we’re certified and insured to install a complete range of home cinema and home entertainment installation including screens, projectors, surround sound and controls.