How Changing Broadband Providers Always Gets You A Better Deal* 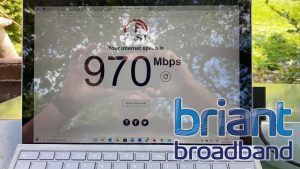 The benefits of switching broadband provider, energy, and phone company can’t be overstated. Many suppliers offer outstanding deals with new contracts, but have standard contracts which are so bad they almost appear to penalise customer loyalty. You don’t get discounts which are available to new sign-ups, the customer service you receive is often rubbish, and in the case of broadband customers, despite paying more than newer customers you’re stuck with an old router which was never top of the line in the first place, meaning that you simply aren’t getting the speeds new customers do.

Shopping around means that you’ve putting yourself in line for those great deals. Many broadband providers depend on complacency and laziness among the majority of their customers. If it’s too much of a faff to shop around for a better deal, and when you find one, it’s difficult to get out of your contract, or migrating over means losing your phone number unless you pay a fee, then you’re likely to stay with them despite a better deal being within reach.

But if you’re out of your minimum contract period and you’re just paying a rolling fee to keep getting data, why not see what other deals are out there? Better prices, brand new hardware and better customer service are all ripe for the picking!

While price savings are a key benefit, there are many other benefits to switching to a newer, faster broadband deal.

If you’re riding the wave of the Smart Home Revolution you’ll need data, and loads of it, fast. Your old router wasn’t built for that kind of hard work. If your router came free when you first took out your contract several years ago it was bog-standard then, and never designed to cope with the number of connected devices each household currently owns. In the UK a survey published in January 2021 showed that the average household had 9 smart devices, and that’s set to double year on year. But that’s only the average household. People who are really into smart tech will have many more connected IoT enabled products, and they all need a strong, stable source of fast data if they’re to work properly. And you expect your yonks old freebee router to cope with that demand?

Not only is an older router slower, it will probably have security issues which leave it open to hackers and scanners. It’s fairly easy to find out how long a phone, for example, will be supported with software updates for, but not so with wireless routers. Did you even know that your router would need software updates? Or that without those updates and software support from the manufacturer it could be the easy-in for people who want to hack your ioT network?

A survey conducted in December 2020 among 6,000 respondents discovered that extrapolated results would mean that millions of people are using routers which are more than 5 years old and unsupported with software or firmware updates from the manufacturer.

If you stay loyal to your current broadband provider you won’t get a new router automatically. If you ask for one you may be asked to pay an upfront fee, or they may make you re-commit to your contract, tying yourself in again, but without any of the new customer benefits or inducements.

As well as better security and speed, what else does a new router offer?

Your old router was probably designed to have a maximum of a couple of laptops and a handful of phones using it at any one time. The signal didn’t have to be particularly strong, and there would have been no need to prioritise which devices got data first while other less data hungry devices were relegated. But today’s home entertainment technology depends on instant access. You need a lot of data close at hand if you’re going to stream HD movies on a 4k or 8k or OLED television set. That means that not only does the signal have to be strong, but you don’t want to see movies start buffering if someone in the next room starts downloading music. Your brand new router will prioritise your streaming entertainment, while still providing data to the download. What that means is the music files will take a few seconds longer to download, but your show won’t be interrupted.

Switching broadband provider means that you get better customer service too. Companies which formerly dominated the market are having to compete with smaller, local broadband providers. Those local ISPs are more responsive, with neighbourhood offices instead of foreign call centres, and have engineers who live in the same area as you. The result is getting through on the phone when you ring because they’re not dealing with thousands of calls every day, a responsive person on the phone who knows exactly what’s going on, and engineers who can be there to help you in an hour or two. So no more waiting in all day for an engineer to arrive. Your local ISP can tell you exactly when to expect the engineer to come.

Because the local ISPs are new to the market they are coming into it with the latest technology and no heritage. That means that when you sign up with them they aren’t going to fob you off with slower speeds or limited data because their old, underinvested infrastructure can’t deliver more. Instead you’re going to get fibre and wireless fast data at competitive prices. With the rural gigabit scheme, even those who were previously left woefully behind when it came to broadband infrastructure will be able to access super fast and ultra fast internet data.

So what are the TL;DR pros and cons of switching broadband providers?

If you phone is part of your package you could lose it, or have to pay a fee to port it over

You get better broadband data speeds

You get better customer service, particularly if you go for a smaller local internet service provider

*You don’t have change. You might have the best deal already, in which case, stay where you are!