Can Your Television Receiver Stand Another Storm? 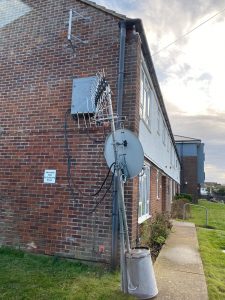 We’ve had Storm Ciara, and this weekend it looks as if we’re going to have another named storm in the form of Storm Dennis. If your satellite dish or aerial withstood the last gale, could it withstand another one?

TV aerials and satellite dishes work by presenting as large a surface area as possible to the incoming signal. The more signal the better, so you get excellent picture and sound as well as a complete choice of channels. Which is great if you live somewhere that isn’t prone to frequent gales and storms in the winter and up to sixteen hours of intense sunlight in the summer. While it’s calm everything is fine, but when the wind picks up that large surface area acts in exactly the same way as a sail, and it’s only the great job the installer or maintenance engineer did when they last looked at it which keeps it from flying off, potentially causing incalculable damage to anything or anyone it hits along the way.

If your satellite dish or aerial antenna was installed recently it’s probably going to be quite safe and do a fine job of standing up to the weather. If it does happen to move at all it’s no problem for a professional installation and maintenance firm such as Briant Communications to realign the dish or mast so that it picks up signal again. The bigger problem comes from old redundant receivers which aren’t being used any more. It’s a faff to have the old receivers taken down and removed when you’re putting the new one up, so why not leave it in place?

The problem is that you now have an ageing piece of unwanted and untended technology attached to your wall, chimney stack or roof which is still getting battered by the wind and rain. You won’t notice that they’re getting loose because your reception isn’t affected, but a large piece of unsecured metal on the roof poses a huge threat to your house and personal safety!

Having old, rusted, ugly TV antenna and satellite dishes not only looks much better, it is far safer too. Those old dishes and aerials can come crashing down on your roof, damaging tiles and slates, letting the wind blow into the attic space causing even more damage, or they can fall down damaging your, or your neighbour’s property, such as cars, conservatories, worse yet they could cause someone serious personal injury if they happened to get struck when it’s blown free.

And while it’s more likely to happen when the wind is howling, they could fall down at any time, posing a very real hazard to your family and neighbours.

Getting old aerials and satellite dishes is a quick job, but it’s not for the feint hearted! Climbing a few floors up a ladder to detach a large, heavy piece of electronic equipment takes skill and experience, which is why you should leave it to qualified, skilled and most importantly insured engineers!

Insurance is important here because should your odd-job man have an accident as he’s trying to take it down and he isn’t fully insured you could be left significantly out of pocket if you need to undertake further repair work due to their negligence. An experienced installation and maintenance engineer almost certainly won’t have any trouble taking the device down, but should anything go awry you can rest assured that it won’t be you who ends up footing the bill.

Routing Maintenance And Servicing For Satellite Dishes and Antenna

As much as it’s important to take down aerials and TV dishes which aren’t being used any more, your working receivers can be adversely affected by even a small shift brought about by the weather.
Satellite receivers need to be very accurately aligned with the satellite orbiting the earth otherwise you won’t get a good picture or all the channels which you had before the receiver moved. Similarly, if you’re watching digital TV the aerial needs to be directed carefully toward the local transmitter in order to get the best signal. If you live on the south coast this is particularly important as the signal will only be coming from transmitters north of your home, while those inland have the benefit of being surrounded by transmitters.

Routine maintenance and servicing will prevent you losing reception as regular inspection will allow your engineer to ensure that any loose or rusted bolts are tightened or replaced, if the aerial or TV dish is being struck by tree branches they can take steps to remedy the problem, and they can ensure that all cable joints are sound and the cable is secured to the building so there’s no danger of them coming free when the wind picks up.

If you have an old, unused TV receiver, or you find that you’re losing picture during storms and after foul weather get in touch with Briant Communications and we’ll carry out all necessary repairs and maintenance. We provide a free, no obligation quote for your approval before we carry out any work, all of our engineers are backed by industry mandated insurance and provide all the warranties and guarantees you’d expect from a company which has been installing and servicing TV receivers for more than thirty years.

To book your appointment fill in the contact form or call us on 01273 465377 and speak to one of our friendly office staff.