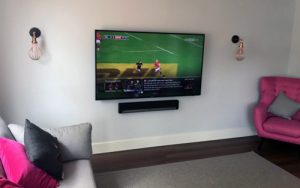 The theory is that your prime seating position is directly in front of your TV set, at a distance 150% of the width of the TV while the set should be mounted at a height where the bottom third of the screen is in line with your eyes when you sit in your favourite chair. In theory this will mean that the screen will fill your field of vision as fully as possible without you needing to move your head to see the full picture and you won’t have to raise your head to look up at the screen.

The reality is many of us don’t take the time or have the room to achieve the perfect setup that one would have in a home cinema or entertainment room. We have to make do with a TV in our living room instead. However, when you’re having your flat screen television professionally installed it’s worth asking where the best position for viewing would be. For many of us placing it over the fireplace would seem the natural choice, but while the overmantle is perfect for a mirror, it’s not best for a television set.

Few of us have the space to arrange our living room to centre around making the television the prime focus of the room either. While it’s the way most of us spend up to five hours a day getting entertainment and news, not many families would like a front room with one seat placed perfectly for watching TV.

Flat screen television sets, specifically high definition screens depend on several layers of filters achieve the most detailed picture with a complete spectrum of colour. Unfortunately, if you look at the screen from an oblique angle those filters won’t work for you and that’s when you see the colours start to transform. A family can’t watch TV together and all be the perfect distance away and in the perfect viewing position, so the screen needs to be further away.

The Perfect Colour For Your Television Is Up To You

Getting the colours right can be as much of a challenge as finding the right location for the screen. People have different preferences and the screens themselves have different capabilities. True black has always been something of a holy grail for television manufacturers. A black as dark as can be achieved means not only that black appears black and not grey, but all the other colours look better by contrast. The downside is that as well as being very hard to achieve, the blacker the blacks the more reflections can be seen on the screen. This isn’t a problem if you’re watching in a darkened room but it’s far from ideal for daytime family entertainment.

All television manufacturers are different and consequently there is no hard and fast rule for adjusting the picture on your television to get the best possible blend of colour, contrast and backlighting but these simple adjustments should help you achieve a smooth running picture with superb sharpness and clarity along with natural colour and no loss of detail in darker areas of your shows.

In Picture Mode choose ‘Cinema or ‘Movie’. Dynamic, Vivid or similar will produce a burned out brighter picture which is far too bright for viewing under normal conditions.

Turn off Motion Smoothing. This facility is supposed to make objects moving at speed in sporting events appear to be moving more smoothly, but in action sequences it has an adverse effect. Because HD can make regular motion look a bit blurry they invented Motion Smoothing, the problem is, with high speed action sequences the smoothing become overwhelmed, resulting in a degradation of the picture.

Turn ‘Sharpness’ down or off for better detail. While this appears counterintuitive, the sharpness you get doesn’t pick out the fine detail in the original film, it artificially finds edges and enhances them, however, this can eliminate softer details such as graduating tone and fine texture.

Not Too Bright On The Backlight

If you’re watching TV in a well lit room you may want to turn the ‘Backlight’ up as it will bring out the picture and help overcome any reflections and the effects of sunlight on the screen. If you’re watching in a darker room, turn the backlight down, as it’s not necessary, will be harsh on the eye, and doesn’t positively affect the picture quality overall.

Moving on to the controls that we’ll all be familiar with from cathode ray tubes where the adjustments were very limited, start off by turning the contrast up to full before dialling it back to a level you’re comfortable with. It’s not a finite resource, so if you prefer it at 99% then go with it.

Set the brightness to 50%. You’ll probably find that your preference is around this middle mark, but it will vary depending on the ambient light in the room where you’re watching.

Start In The Middle And Choose Your Own Preference

As with the brightness, set the colour to 50% starting out and adjust accordingly. As mentioned above, some prefer a rich colour palette while others prefer something more muted, but starting in the middle and adjusting your preferences from there is the best way to start.

You’ll probably find that you have other television controls such as hue, tone, temperature, and so on. My preference would be to set these to zero, ‘normal’ or off as all they seem to do is affect the overall colour of your picture. For me a perfect picture comes from having a baseline where white is a pure white and black is as black as possible.

Choose ‘Fit to Screen’ for your aspect ratio. It seems that all the other options will cut the top or sides (or even both if you choose zoom) off of the picture, or will distort older films and TV shows by pulling a squarer picture into a widescreen format.

Options For Prolonged Or Intense Television Use

When you’re playing games or using your TV as a computer monitor choose ‘Computer Mode’ as this increases the frame rate and eliminates many of the video playback adjustments your TV makes automatically.

The frame rate for most broadcast TV is 24 frames per second, slower than this and you’ll start to see visible flicker between frames on the screen. HDTVs have a higher frame rate so as to mask this flickering, but a computer screen has a frame rate of 60 frames per second in order to eliminate any visible flickering. This is not because they need to render action more effectively but staring at television screen with a frame rate of 24 per second at arm’s length for 8 hours a day was found to be bad for the eyes and produce headaches. As well as increasing frame rate it also eliminates many of the video processing and other work your television does behind the scenes in order to eliminate lag and adjust picture quality. This means that as soon as you do something on your terminal or console it happens on screen without delays which could mean the difference between life and death for most gamers.