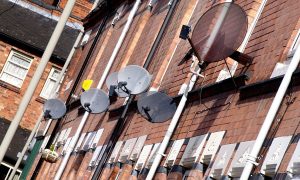 Travel around any city and you’ll see houses of multiple occupancy, houses which have been converted into flats, apartment blocks and high rises. Each one of these homes has an individual or entire family all with unique television watching habits. In some instances you’ll see that there are still multiple satellite dishes and aerials clinging to the outside, usually rusty and uncared for. END_OF_DOCUMENT_TOKEN_TO_BE_REPLACED